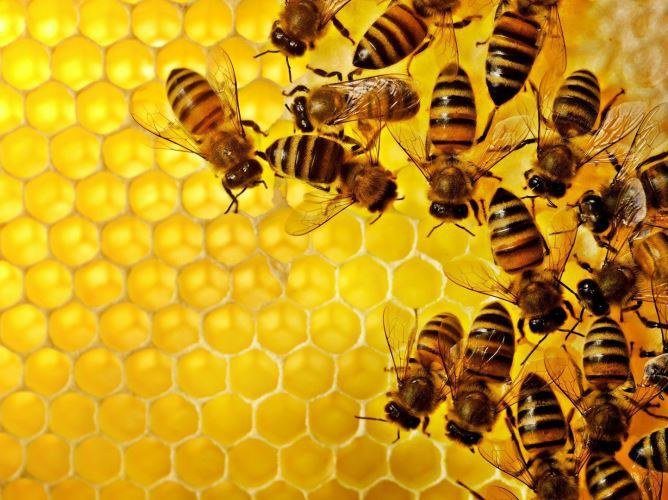 OPENING CEREMONY OF THE BUILDING OF ASSOCIATION OF BEEKEEPERS OF UZBEKISTAN

OPENING CEREMONY OF THE BUILDING OF ASSOCIATION OF BEEKEEPERS OF UZBEKISTAN 30.05.2019 15:53

OPENING CEREMONY OF THE BUILDING OF ASSOCIATION OF BEEKEEPERS OF UZBEKISTAN 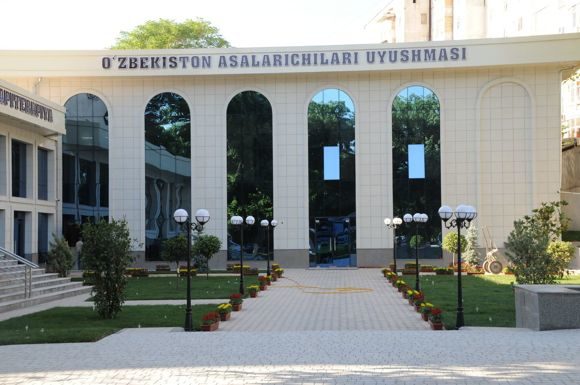 As part of the execution of the Decree of the President of the Republic of Uzbekistan No. PP-3327 "On measures for the further development of beekeeping in the republic" dated October 16, 2017, with the financial support of Alokabank, the capital reconstruction and construction of the office of the Association of Beekeepers of Uzbekistan, which includes the administrative department coordinating all regional associations of beekeepers and the work of the beekeeping industry in the republic; the shopping center "Asal olami", which presents the whole variety of honey and beekeeping products of Uzbekistan; specialized veterinary pharmacy for bees; exhibition of equipment for the industry, hives and tools; Alocalizing leasing company, which supplies equipment and new technologies; Apitherapy Medical Center, where qualified doctors advise on the use of beekeeping products, sting bees for treatment; specialized laboratory to determine the quality of honey and other bee products.

In accordance with the Decree of the President of the Republic of Uzbekistan No. PP-3327 "On measures for the further development of beekeeping in the republic" of October 16, 2017, the Association "Uzbekiston asalarichilari" was organized, in the regions - regional associations of beekeepers, the main directions and tasks of which are:

- development of a legal framework for beekeeping;

- training and retraining of personnel on the basis of higher, secondary special vocational educational institutions, including foreign ones;

- strengthening of food supply, reasonable use of natural resources.

In 2018, the Uzbekiston Asalarichilari Association entered the International Federation of Beekeeping Associations Apimondia, which will allow accelerating the transfer of the republic’s beekeeping to an industrial basis, use the international experience of leading countries, introduce the agricultural industry’s “pollination” by bees into agricultural production agricultural plants, significantly increasing the yield of agricultural crops, due to which significant inclusions are made q in the implementation of the Program of the Food security of the country.

In September of this year, the 46th Apimondia Congress will be held in Montreal, Canada, where the certificate of entry into the International Federation of Beekeeping Associations Apimondia of the UzbekistanAzalarichilari Association will be solemnly presented.

In 2018, for the first time, 20 applicants were recruited to the faculty in the specialty “zootechnician-beekeeper” at the Fergana State University and the Samarkand Institute of Veterinary Medicine. In all areas at colleges organized one-year training courses with secondary special zootechnical education for the apiculture industry. Foreign specialists held seminars for college teachers on how to learn the course of beekeeping. Horizontal ties are being established with academic and educational institutions in Russia, Israel, and Ukraine, with the aim of training the teaching staff and student exchanges.

A leasing company has been established at the Uzbekistan Airline Association, together with AK Alokabank, with the involvement of loans from commercial banks and starting its own leasing-based supply of the necessary equipment and inventory for recruiting bee-complexes for the production of beehives and other equipment. honeycomb, as well as honey packaging.

A procedure for the transportation and placement of honey bees in the Republic of Uzbekistan has been developed and implemented, according to which, during the honeybees collection, at the applications of the association, beekeeping farms - members of the association are granted free use of forest land, protected natural areas (with the exception of state reserves, protected zones of biosphere reserves), mountain and foothill zones, natural pastures, and also agricultural lands.

Developed and amended the Administrative Code on the falsification of honey, which, when considered in the Cabinet of Ministers, was expanded to include all food products and industrial products produced in the republic. Work is underway to improve the standards for bee products, introduce international standards and join Uzbekistan to the Interstate Committee for the Standardization of Bee Products.

Numerous experiments have been carried out on sowing honey trees and plants in the regions. Planned work is underway to organize the Experimental Station on beekeeping and attracting foreign scientists; a project has been prepared for implementation jointly with the UN FAO, which provides for a grant of $ 350,000 to train specialists and scientific personnel for beekeeping in Uzbekistan.

In order to improve the species composition of bees in the republic, more than 2500 pedigree queens of the Carpathian breed from western Ukraine and queens of the karnik breed from Germany were imported; this year it is planned to import about three thousand pedigree bees. In Namangan region, a laboratory for artificial insemination of queens is organized, routine work is being done to improve breeding work, an isolated plant in the Fergana region is organized to receive breeding queens.

During the period of the Beekeepers Association, the export of beekeeping products increased significantly - exports of bee packages increased by a quarter, the number of which was 207 thousand, honey exports increased more than 20 times, and total foreign exchange earnings exceeded one million dollars, a quarter higher than the previous period. Preliminary forecasts show an increase in exports of bee products for 2019. In 2018, more than 17 thousand tons of sweet products were delivered to the dastarkhan of Uzbeks, the production of honey per capita reached 0.5 kg.

For the first time in the history of Uzbekistan in 2019, the technology of pollination by bees was introduced into agricultural technology of agricultural crops. In the Samarkand region in the Zhambaysky and Bulungur districts, horticultural farms with beekeepers signed a contract for pollination of sweet cherries, apples, plums, pears on the territory of one and a half thousand hectares with the involvement of 7,500 bee colonies. During the entire period of flowering, the bees were evenly placed in gardens in groups of 5 bee colonies for the purpose of full pollination. According to agronomists, the projected yield of the gardens exceeded all expectations. The expected increase in orchard production is several times higher than the cost of transporting bees and paying beekeepers for pollination.

At the expense of pollination by bees of crops in the republic, the yield increase according to the most modest calculations of specialists today is over 1.5 trillion soums. Only through organizational measures and the proper placement of bees in gardens and fields this figure can be increased to 4 trillion soums.

The implementation of measures outlined in the decree on the development of beekeeping, the presence of its office and regional associations of beekeepers enables the organization of the vertical of power and a unified system of industry management, its dynamic development, the creation of new jobs, the transfer of beekeeping to industrial basis, the introduction of advanced technologies and, as a result , to increase the volume of honey production, meet the needs of the population of the republic in high-quality beekeeping products, increase the export potential of the industry.

In accordance with the Decree of the President of the Republic of Uzbekistan No. 4243 "On measures for further development and support of the livestock industry" dated March 18, 2019 for beekeepers wandering with bees, for the first time, a privilege was introduced for paying customs duties on imported honey, which will undoubtedly contribute to the development of beekeeping in the republic and the strengthening of international cooperation between beekeepers.

In order to promote bees and bee products among the population, contributing to its improvement, integrating beekeepers from all over Uzbekistan, introducing intensive technologies and sharing experience, increasing the effectiveness of implementing the tasks outlined in the resolution, supporting and coordinating the activities of beekeeping subjects, The holiday “Asal Bayrami” was held in 2017-2018, initiated by AK “Aloqabank” and the Association of Beekeepers of Uzbekistan.

Significantly quantitative and qualitative changes in beekeeping in Uzbekistan. The trade appeared colorfully decorated packaged honey, a variety of which pleasantly surprised the buyer. And what pleases beekeepers most of all is the really increasing demand for honey products from the population. Honey from cotton, honey from yantaka, with fine, a variety of steppe and mountain honey - honey of the ancient Silk Road - a planned Uzbek brand for entering the world market of honey.

More and more people are interested in bees, they turn to regional associations of beekeepers for advice, for help in working with bees, for beekeeping equipment, for hives. The annual increase in beekeeping exceeds 15%. Today, more than 14 thousand subjects are engaged in beekeeping, the number of bee colonies that they have has exceeded 870 thousand. The projected honey harvest for the current year is more than 19 thousand tons.

The leaders in the beekeeping of Uzbekistan are representatives of the Namangan region, where there are farms with 5-9 thousand bee colonies, providing a significant part of exports in the country. The introduction of new technologies and the quality of breeding bee families are distinguished by beekeepers of the Fergana Regional Union of Beekeepers. Unbeatable masters in the marketing of honey products - beekeepers of the capital.

The main thing - beekeepers feel the real support of the industry from the state, an understanding of the value of bees not only as producers of sweet products - honey, but also as the main pollinators. 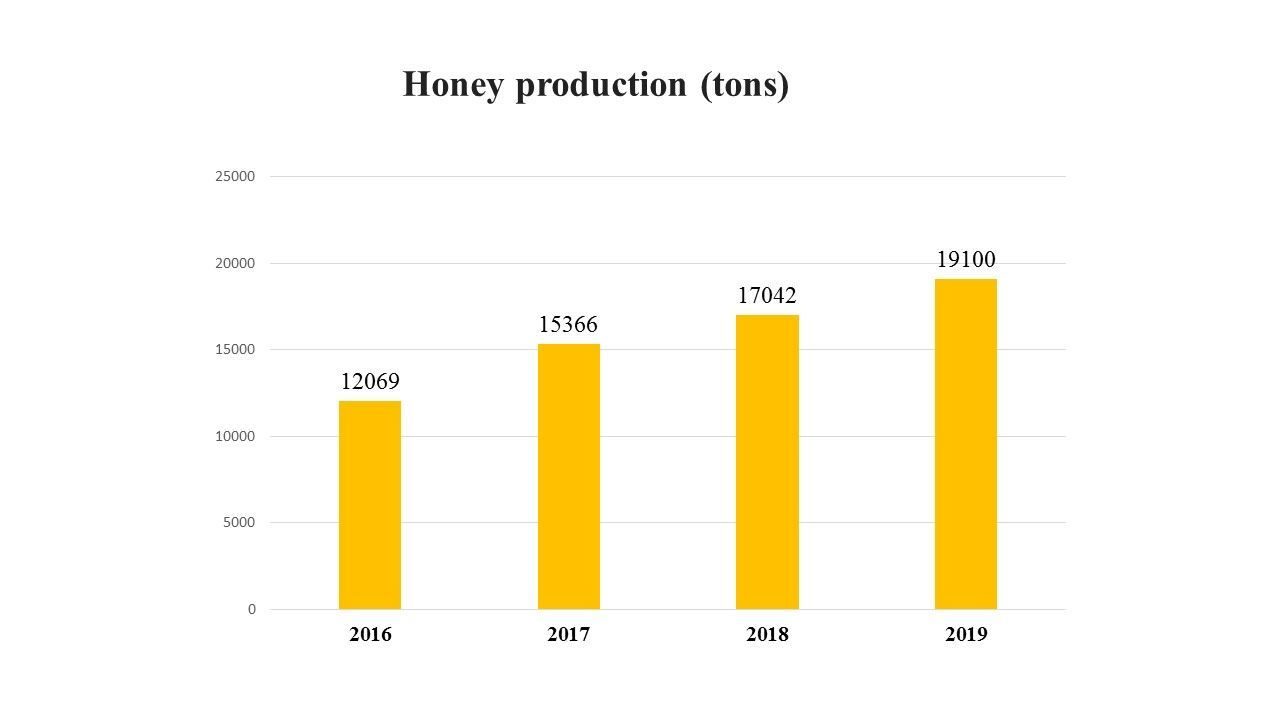 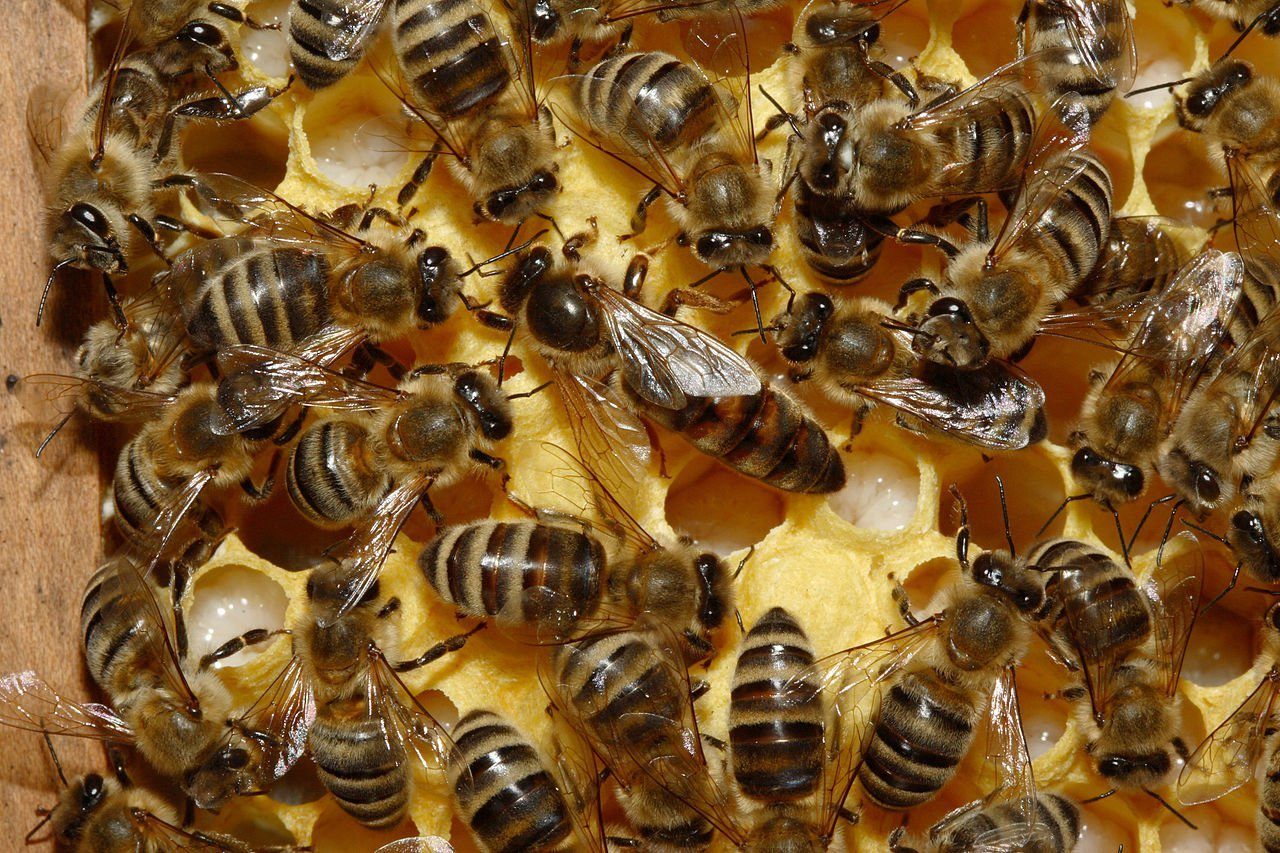 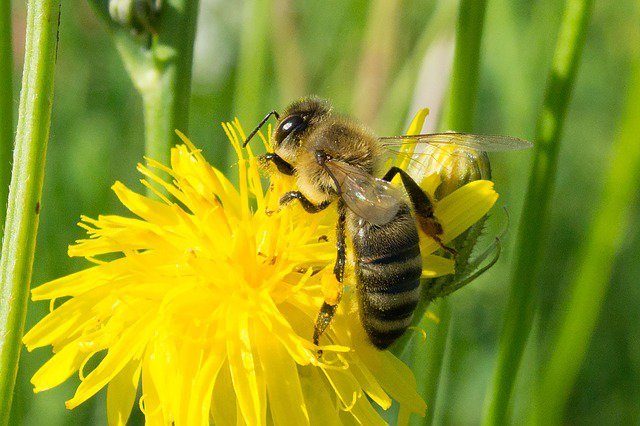 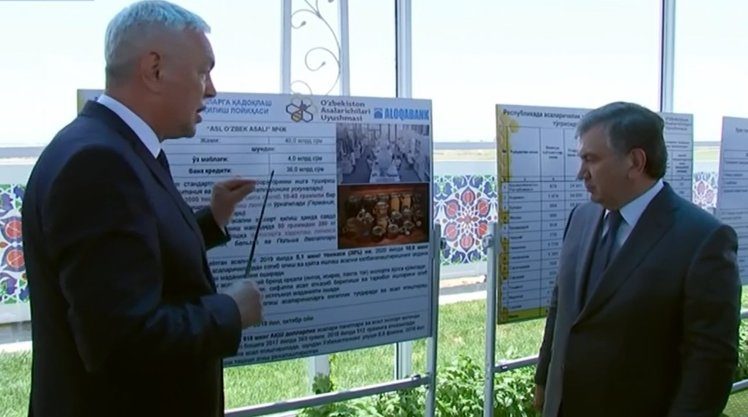 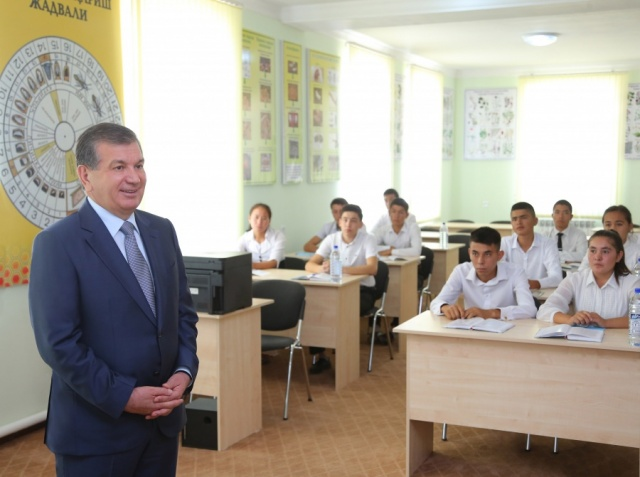 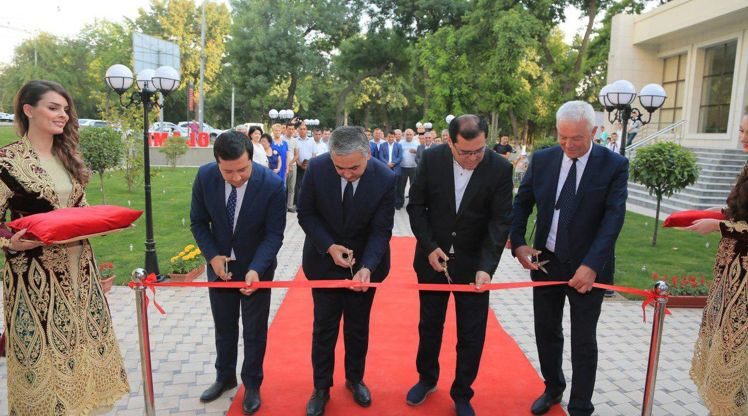 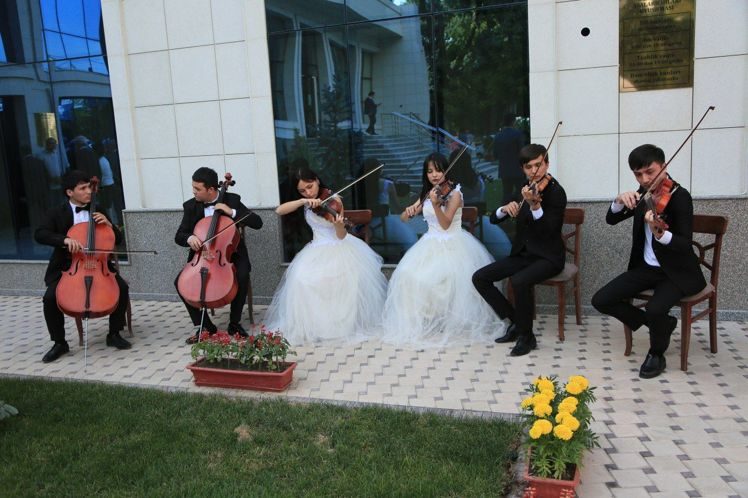